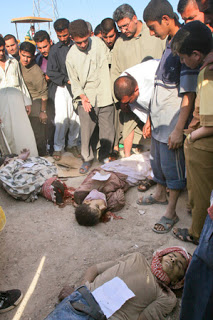 Via Rex Wockner comes word that Outrage!, the UK-based activist group headed by Peter Tatchell, is reporting that gays are continuing to be executed by hit squads in Iraq, with the support and approval of Iraqi clerics. The dead men pictured here were suspected of being gay.

OUTRAGE!: Iraqi lesbians and gays continue to be subjected a systematic reign of terror by Shia death squads. The government of Iraq refuses to crack down on the killers or to take any action to protect its gay citizens. It is a regime that is dominated by Shia fanatics and homophobes,” according to Ali Hili, the coordinator of the humanrights group Iraqi LGBT (lesbian, gay, bisexual and transgender).

“Supporters of the fundamentalist Sadr and Badr militias boast that they are cleansing Iraq of what they call ‘sexual perverts’. They are open about terrorising gay Iraqis to make them flee the country and murdering those who fail to leave. Their goal is a queer-free, pro-homophobic Iraq. They are dragging our country back to the dark ages,” said the London-based Mr Hili, who is also Middle East spokesperson for the gay human rights group, OutRage!

Some members of Prime Minister Nouri al-Maliki’s government are linked to the anti-gay death squads. They are the political representatives of the Muqtada al-Sadr movement and the Supreme Council for Islamic Revolution in Iraq (SCIRI). Both these parties have militias, respectively the Mahdi army and the Badr brigades, who are responsible for the execution-style killing of lesbian and gay Iraqis – and the murder of many other Iraqis, including Sunni Muslims, trade unionists, unveiled women, journalists and men wearing shorts, jeans or western-style haircuts.

“The murder of gay Iraqis has the support of highly influential religious leaders, such as Grand Ayatollah Ali al-Sistani. He issued a fatwa in late 2005, calling for the execution of gay people in the ‘most severe way possible’. After international protests, he removed the fatwa from his website, but the fatwa itself has not been
rescinded. It remains in force and is the spiritual sanction for the death squads to murder gay, lesbian, bisexual and transgender people,” said Mr Hili.

The Outrage! blog lists many example of LGBT Iraqis abducted and murdered. One example: “Sayf, a gay 25-year-old, worked for the Iraqi police as a translator. He was kidnapped in the Al-Adhamya suburb by black masked men in Ministry of Interior security force uniforms who drove a marked police car. Almost certainly they were members of the Badr militia which has infiltrated the Interior Ministry and police. Sayf’s body was found several days later, with his head cut off.”

Once we finally do leave Iraq, I fear that these murders will only escalate. Peter Tatchell reports that an underground network of gay Iraqis is helping some evade the hit squads, providing temporay refuge in safe houses. Visit the Outrage! blog for information on how to donate funds to help the Iraqi gay underground pay for this housing and for escape passage to Jordan, Syria, and Lebanon.

Previous Heads-Up On West 28th
Next Alanis Has Funny Humps. And Lumps.