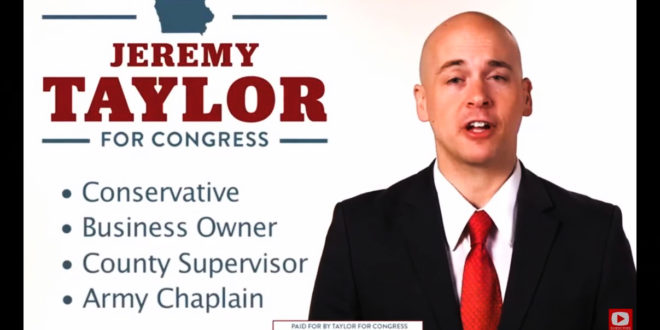 Read the full article. Taylor finished third in the 2020 GOP primary with 7.8% of the vote.

We are Team Taylor, the supporters of Jeremy Taylor for Congress. Those of us on Team Taylor would like to congratulate Jeremy Taylor on his promotion to Major in the Iowa Army National Guard.#IA04 #iapolitics pic.twitter.com/JjjQHy9GZU

Thankful for so many for calls and texts that folks have already voted early today. Let’s do this! Find your polling place in #ia04 here: https://t.co/2sA9MG3NVA… pic.twitter.com/MiCIKIofNV

11th Hour. The 4th Quarter. We are working hard in #IA04 and running through the finish line. Lots of phone calls by incredible volunteers & last minute ballot-chasing. You get to decide and no one else for you. Thankful for real grassroots! #IAPolitics pic.twitter.com/svQgw7T47W