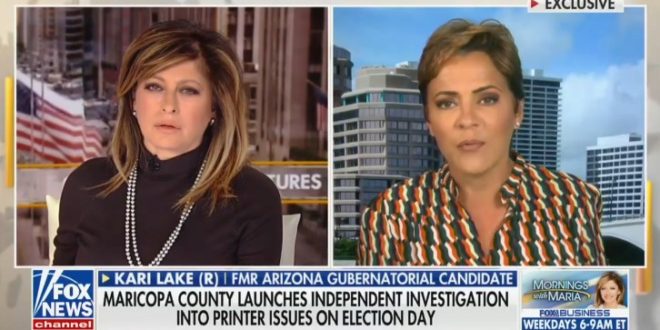 “There’s a lot of evidence, and we saw it play out on Election Day in Arizona when 60 percent of the voting locations stopped working as soon as the polls opened on Election Day knowing that 75% of the people voting on Election Day were voting for Kari Lake.

“They sabotaged election day by printing the wrong images on the ballot, and jamming up the machines. The machines didn’t work at at least 60 percent of the polling locations, and that caused lines of two and three and four hours.

“People couldn’t vote. They got to the front of the line, the machines were jamming, and people were disenfranchised. And so we’re fighting this, and we’ve got excellent evidence, and we’re taking it to the appellate court now, we will take it to the Arizona Supreme Court.

“And we will take it to the United States Supreme Court if we need to, but we will not allow our elections to be stolen.” – Kari Lake, receiving zero pushback from Fox News host Maria Bartiromo.

Bartiromo is named in Dominion’s $2.7B lawsuit.