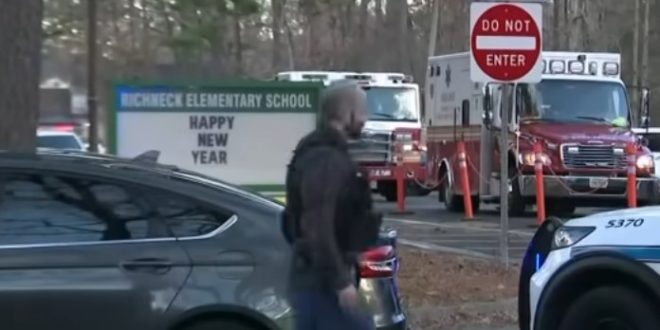 VA Teacher Was Shot While Trying To Confiscate Gun

The first-grade class at Richneck Elementary School in Newport News was in a small reading group about to go to art when one of their classmates pulled a handgun from his backpack and pointed it at his teacher, according to Brittaney Gregory, whose son was in the class.

“She was going to confiscate it, and that’s when he shot,” she said. Run, the teacher said. The children raced to another teacher’s classroom area, where they stayed in lockdown.

After the shooting, the 6-year-old was in police custody, authorities said. City officials declined to say where the child is now, and whether he will be charged with a crime. It is unclear how he got the handgun.

“She was going to confiscate it, and that’s when he shot,” Brittaney Gregory, whose son was in the class at Richneck Elementary School in Newport News, told the The Washington Post. https://t.co/ayBgXLZdyg

Teachers are #heroes too. Let’s rally around Ms. Abby Zwerner just as we did for #DamarHamlin The fact that this teacher was shot by a 6-year-old in school should perplex us all and lead to real resolutions to this national epidemic on #GunViolence #AbbyZwerner #NFL pic.twitter.com/E7ASTKDVrj

Youngkin response to this incident?