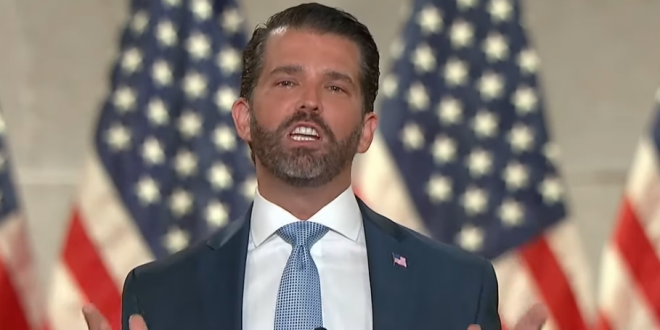 Donald Trump Jr. is selling Bibles on social media. The eldest son of Donald Trump was accused of “peak grift” over a video in which he promoted the “We The People” Bible that he said defended America’s “Judeo-Christian” values that he claimed are currently under attack. It comes as key evangelical figures turn their backs on the former president who has launched a third run for the White House amid a slew of investigations into his conduct.

Read the full article. “Printed in America.” Bet it’s not.

The fact that some Christians dont see the problem here is more affirmation that it’s not the GOP that has failed Christians, it’s the church.

Good Pastors and Priests rise up and call this out. https://t.co/OKRFxRdNhd

Grifting the Holy Book now. A new low even for Jr. https://t.co/BvxuXRzbpk

I like the bit at the end explaining how the King James Bible is ideal for American patriots. It was written in England and published in England in 1611. Don’t get me wrong, it’s wonderful work. But lol. https://t.co/pqmyMsryOP