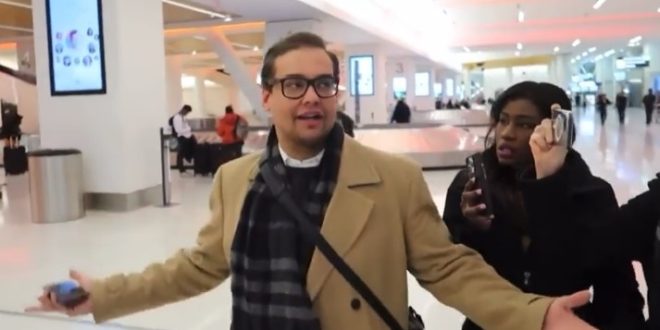 Santos On Doing Drag In Brazil: “I Was Young And Had Some Fun At A Festival, So Sue Me For Having A Life”

Embattled Congressman George Santos faced new questions from Eyewitness News reporter Chantee Lans as he arrived back in New York on Saturday. Lans asked Santos about his campaign finances – specifically where the $700,000 came from that he lent his campaign. He gave no response.

The openly gay Republican congressman also directly addressed performing in drag in Brazil. “I was young and I had fun at a festival — sue me for having a life,” he said. Santos did not answer any questions about House Speaker Kevin McCarthy or his two house committee assignments.

People have the freedom to dress however they want to dress. What’s very telling is that the person purportedly known as GOP Congressman George Santos felt compelled to lie about it. Because he knows that is the one issue Republicans who support him care about. https://t.co/rlLIoJWtAJ

“No I was not a drag queen in Brazil, guys. I was young and I had fun at a festival. Sue me for having a life,” Santos told reporters in NY today.
On reports he lied that his mom was in WTC on 9/11: “I have zero takes for you guys . .. I’m focused on serving the American people”