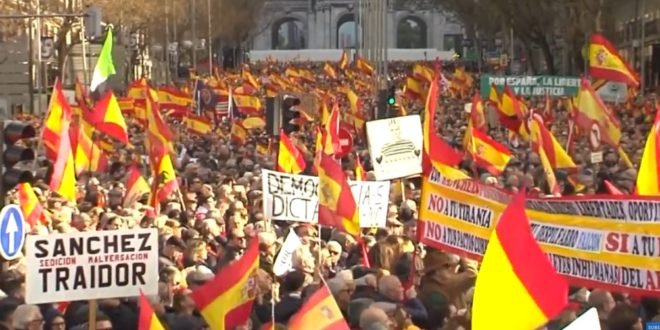 Tens of thousands of people packed into central Madrid on Saturday against the left-wing government of Spanish Prime Minister Pedro Sanchez. The protest, called by dozens of right-leaning civil society groups and backed by the center-right Popular Party (PP) and the far-right Vox party, came in a key election year for Spain.

The central government said around 30,000 people gathered at Madrid’s Cibeles Square, while organizers said some 700,000 people attended. The demonstrators waved Spanish flags and chanted “Sanchez, resign!” or “traitor!” as they denounced the government.

Vox leader Santiago Abascal, the only party leader to attend, told the crowd the government had “trampled the constitution by locking up Spaniards,” in a reference to COVID lockdowns.

Around 200km (120 miles) away in the northwestern city of Valladolid, Sanchez told a Socialist rally that the protesters in Madrid were defending a “uniform” and therefore “discriminatory” Spain.

In June 2021, Sanchez’s government pardoned the nine jailed leaders of Catalonia’s failed 2017 independence bid “in the spirit of dialogue”. Its recent decision to replace the crime of sedition with a lesser crime was opposed on the right.

Thousands of people have staged an anti-government protest in Madrid, demanding the resignation of leftist Prime Minister Sanchez. https://t.co/G0zJewLkEo