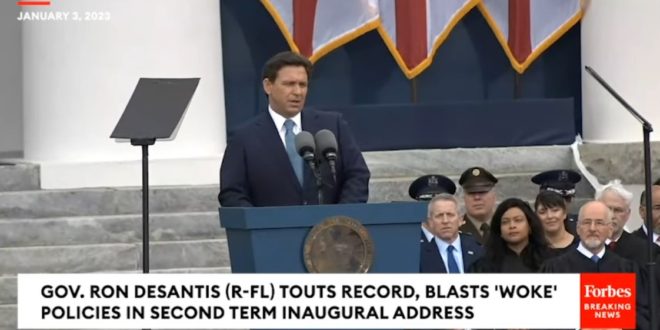 Governor Ron DeSantis said freedom lives in Florida, and called the Sunshine State a “refuge of sanity” after taking the oath of office for a second term on Tuesday.

The swearing-in ceremony took place on the steps of the Historic Capitol in Tallahassee, just before 12 p.m. Florida First Lady Casey DeSantis stood at his side, along with their children.

“Freedom lives here in our great Sunshine State of Florida,” DeSantis said as the crowd cheered. DeSantis touched on law enforcement, workers, teachers, farmers, and seniors in his inauguration speech.

DeSantis took aim at the party over issues including COVID-19 vaccine mandates and the handling of the southern border. “Florida has led the way in preserving what the … father of our country called the ‘sacred fire of liberty,’” he said.

“Florida’s success has been made more difficult by the floundering federal establishment in Washington, D.C.,” DeSantis said, later adding, “It wields its authority through a sprawling, unaccountable and out-of-touch bureaucracy that does not act on behalf of us, but instead looms over us and imposes its will upon us.”

“The results of this have been predictably dismal. This has caused many to be pessimistic about the country’s future. Some even say that failure is inevitable. Florida is proof positive that we the people are not destined for failure.”