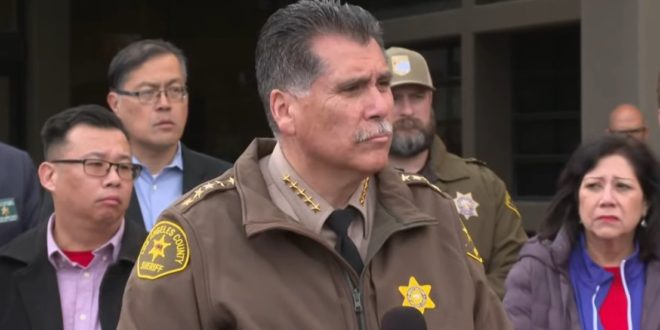 The suspect in the Monterey Park shooting who fled the scene and remains at large has been preliminarily described as an Asian male, Los Angeles County Sheriff Robert Luna said at a news conference Sunday morning.

“Our very preliminary description has been described as a male Asian,” Luna said. “We’ve gotten different descriptions of one suspect, so when I say it’s preliminary, please be patient with us.”

Luna added that officials “are utilizing every resource to apprehend this suspect and what we believe to be one of the county’s most heinous cases.”

Read the full article. Clip below is live.

Jill and I are praying for those killed and injured in last night’s deadly mass shooting in Monterey Park.

I’m monitoring this situation closely as it develops, and urge the community to follow guidance from local officials and law enforcement in the hours ahead.

NEW: According to law enforcement, the Monterey Park mass shooter is a “male Asian.” Witnesses and community members – including Chester Chong, leader of the local Chamber of Commerce – are saying the shooting was instigated by intimate partner violence. pic.twitter.com/pEoIS5dMoj