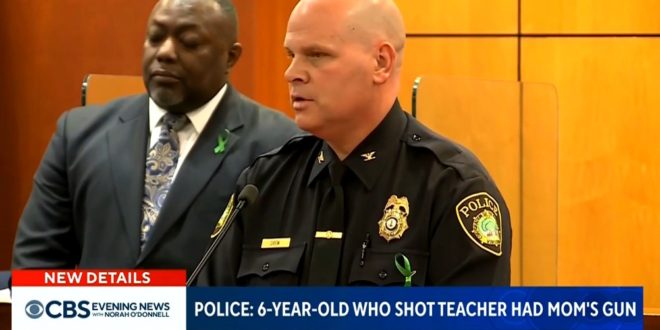 The teacher, identified as 25-year-old Abigail Zwerner, was teaching a lesson when the child drew the weapon, Police Chief Steve Drew said a a news conference. The teacher “took a defensive position” and held up her hand, Drew said; the bullet passed through her hand and entered her chest.

He said there had been no physical fight between teacher and student. The child was using a 9 millimeter Taurus firearm, which Drew described as a handgun.

Police said the gun was legally purchased by the child’s mother. The child brought the weapon to school in his backpack, but Drew said the firearm was on the child’s body, not pulled from his backpack, at the time of the shooting.

JUST IN: The 6-year-old accused of shooting a teacher at a Virginia school took the gun from his mother, police say. https://t.co/cwZBtHOK4E

TEACHER SHOT ALLEGEDLY BY 6-YEAR-OLD STUDENT: A teacher in Virginia in recovering after being shot by a student who police say brought his mother’s gun to school. ABC’s Andrew Dymburt has the new details. pic.twitter.com/tbL08T1d69