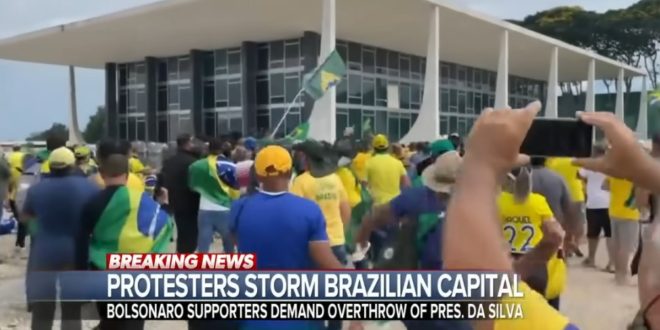 Over 400 Arrested In Attack On Brazil’s Capital

Chaos struck Brazil’s capital Sunday when supporters of former President Jair Bolsonaro descended on government buildings, breached them, climbed on a rooftop and broke windows. President Luiz Inácio Lula da Silva, sworn in Jan. 1, responded by authorizing federal intervention in the Federal District until the end of January. He called those who attacked Congress “fascists,” according to translations of his tweets Sunday.

Ibaneis Rocha, the governor of Brazil’s capital district, said more than 400 people involved in the demonstrations and breaches have been arrested. He said authorities continued to work to restore order. Rocha described the day’s events as acts of terrorism. The incidents, which recalled the Jan. 6, 2021, invasion of the U.S. Capitol, come amid disinformation about the election, aimed mostly at Lula.

When I say this attempted coup in Brazil is Jan 6th insurrection playbook, I mean literally. Trump advisors and strategists Steve Bannon, Stephen Miller are advising Bolsonaro. Bannon told him not to concede and to lie about election fraud just like Trump.https://t.co/8UmW28ugWI