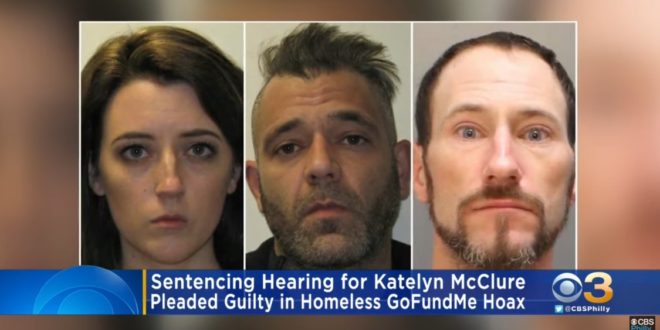 A New Jersey woman who pleaded guilty to helping her boyfriend spread a feel-good story about a homeless veteran that garnered more than $400,000 in online donations has been sentenced to three years in prison on state theft charges.

Katelyn McClure, 32, wasn’t present in the Mount Holly courtroom Friday because she is serving a one-year federal term in the case. Her state prison term will run concurrently and the former transportation department worker will be barred from ever working again as a New Jersey public employee.

Prosecutors said McClure and her then-boyfriend, Mark D’Amico, came up with the good Samaritan story in November 2017, claiming that homeless veteran Johnny Bobbitt Jr. had given his last $20 to McClure when her car ran out of gas on an interstate exit ramp in Philadelphia.

The South Jersey couple launched a GoFundMe campaign, ostensibly collecting money to help Bobbitt get his life in order. The campaign, which featured a photo of McClure, D’Amico and Bobbitt outside a gas station, went viral and some 14,000 donors contributed $402,000.

But prosecutors said McClure, 32, and D’Amico, 43, used most of the money for personal expenses, including gambling trips, a helicopter ride over the Grand Canyon and lavish purchases.

D’Amico and Bobbitt also have pleaded guilty to their roles in the scheme. D’Amico is serving a state prison sentence of five years and a concurrent 27-month federal prison sentence. A federal judge in October 2022 sentenced Bobbitt to three years of supervised probation for money laundering conspiracy.

A woman who pleaded guilty to helping her boyfriend spread a feel-good story about a homeless veteran that garnered more than $400,000 in online donations has been sentenced to three years in prisonhttps://t.co/72tH9jV3ji