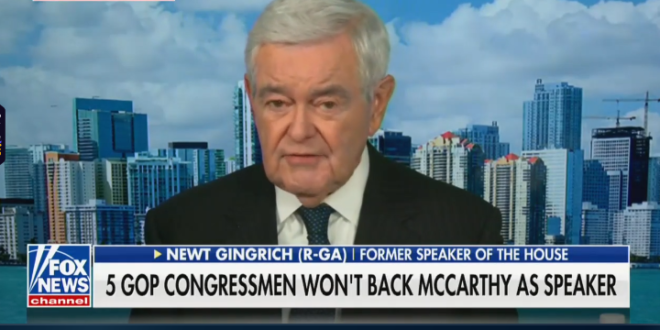 “This is a fight between a handful of people, and the entire rest of the conference. And they’re saying they have the right to screw up everything.

“Well, the precedent that sets is; so do the moderates, so do the members from Florida. I mean, any five people can get up and say, ‘I’m going to screw up the conference, too.’

“The choice is Kevin Mccarthy or chaos. I think it is a remarkably shortsighted and, candidly, selfish position, and I don’t understand where they’re coming from.

“I thought the House would at least be a sign of stability. And these five guys decide to go out as kamikaze pluralists and see if they can’t sink the whole Republican party.

Former Speaker Newt Gingrich on “Never Kevin” Republicans, such at Matt Gaetz, who are unwilling to support Kevin McCarthy: