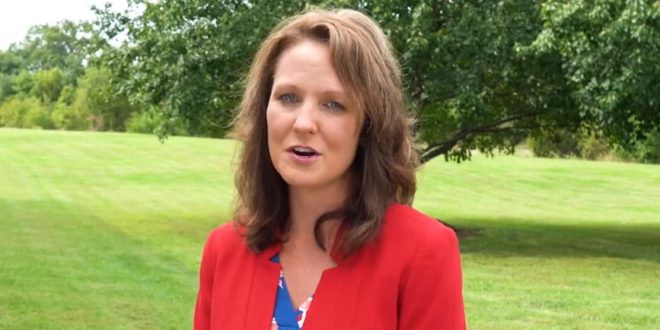 Lawmakers debate changes to House rules at the beginning of the General Assembly, every two years. Previous rules stated “dresses or skirts or slacks worn with a blazer or sweater and appropriate dress shoes or boots” were allowed.

“I’ve seen a lot of lack of decorum in this room in my two years here and not once has that lack of decorum spurred from someone’s blazer or lack thereof,” said Rep. Ashley Aune, D-Kansas City.

Read the full article. Rep. Ann Kelley last appeared on JMG in September 2021 when she helped ban an LGBTQ history exhibit from the state Capitol.

Yep, the caucus that lost their minds over the suggestion that they should wear masks during a pandemic to respect the safety of others is now spending its time focusing on the fine details of what women have to wear (specifically how to cover their arms) to show respect here.

In Missouri – no joke – the GOP-dominated state legislature wants to ban the right to bare arms.

No. Not bear arms. Bare arms.

They want a dress code that would ban female legislators from wearing clothes that reveal their arms. 🤯🤬https://t.co/bRBOWzNVOd