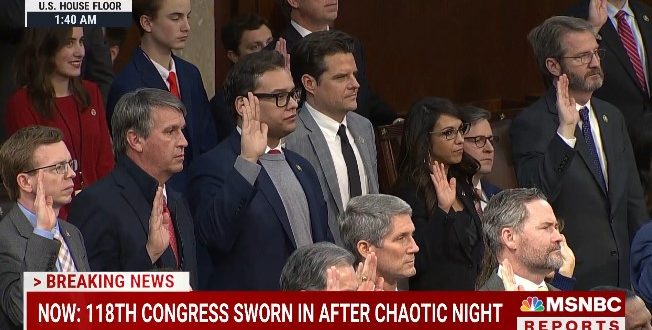 After the vote for speaker, the members of the House officially were sworn in. That includes New York Republican George Santos. During the multiple days of voting for the House speaker, Santos dodged reporters in Washington, refusing to answer questions about numerous lies regarding his education, employment and family history.

Santos is under criminal investigation in two countries, the U.S. and Brazil, and is facing growing calls for him to be barred from serving. Santos sat by himself on the Republican side of the House floor during votes, largely keeping to himself and looking at his phone.

The freshman lawmaker, a Republican from New York, has admitted to lying about his education, work experience and Jewish background.” https://t.co/e2yZxO3iSI

The “USA”chant on the House floor is an abomination. It is sick. The first consequence of Kevin’s win is the swearing in of imposter George Santos who flashed the Ku Klux Klan hand signal on the House floor. What a sad and disgraceful day. Our founding fathers weep in heaven.

Previous FRC Launches Petition Against CVS And Walgreens
Next Carlson: The Capitol Riot Is A “Wholly Created Myth”