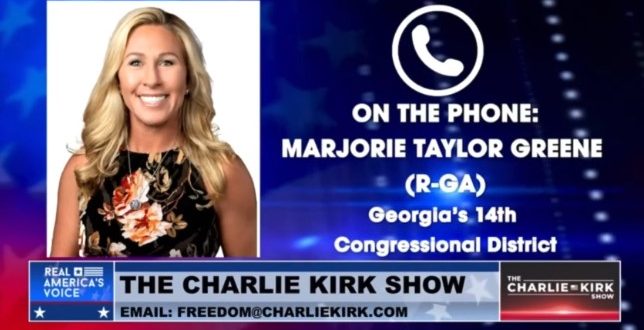 MTG: “Matt Gaetz Is Lying To The American People”

“It is lying! OK? When you have Matt Gaetz and the rest of the group going out there saying Jim Jordan is going to be Speaker, but, yet, Jim Jordan doesn’t want to be Speaker. That’s lying to the American people, Charlie!

“I’m sick of these people that have done things that are hypocritical, truly hypocritical and the base would hate them for it, and they would be screaming at them for it.

“But the base doesn’t know because the only person they’re hearing being chewed apart is Kevin McCarthy.” – Marjorie Taylor Greene, calling in to Charlie Kirk’s show today.

Charlie Kirk suggests it was “affirmative action” for Republicans to nominate Rep.-elect Byron Donalds’ (R-FL) for Speaker of the House https://t.co/8BayBhUk2g pic.twitter.com/qglKN7Mt7e