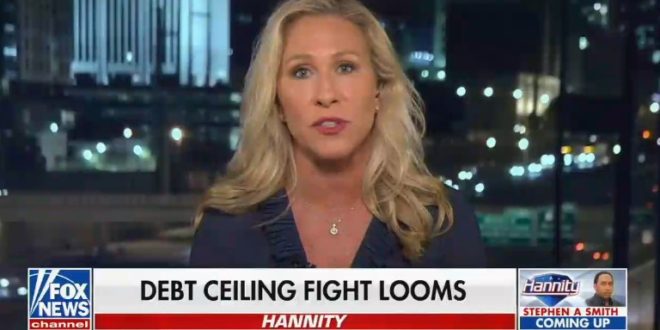 “But we have to do a good job as a Republican conference. It’s a serious issue and the spending in Washington that’s happened for decades now with both parties is the reason why we’re in this terrible place.

“And Republicans are committed to work on the budget. We want to get it under control, we want it to be balanced and we want to reduce the national debt.

“But the debt ceiling is going to be a point of contention in our conference but it’s going to have to be one that we come together on.

“We aren’t going to send something to the Senate to make it to Joe Biden’s desk to be signed and we want to make sure there are things in there that we have to have.

“I, for one, will not sign a clean bill raising the debt limit.” – Marjorie Taylor Greene, backing Sean Hannity’s call for a government shutdown until they get want they want.