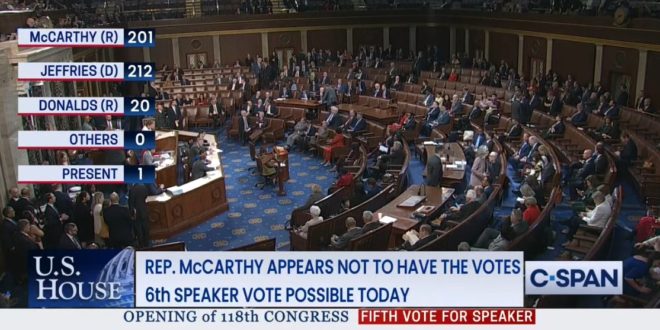 GOP leader Kevin McCarthy lost a fifth bid to become House speaker as Republicans returned to the Capitol Wednesday to do what they couldn’t do Tuesday. The situation has left Congress paralyzed, since no member can be sworn in and no rules can be adopted until a speaker is chosen.

McCarthy is trying a new approach, asking some GOP members who oppose him to vote “present” rather than either endorsing him outright or backing someone else. That could allow him to secure a majority of those casting ballots. The plan is for members to vote again – and again – if necessary.

But if there’s no resolution, the voting could last for days, weeks or even months. Biden calls the situation embarrassing. The fighting is “not a good look,” he told reporters at the White House. Ultimately, though, the GOP drama isn’t his problem, he said.

“The president needs to tell Kevin McCarthy that, ‘Sir, you do not have the votes, and it’s time to withdraw.’” pic.twitter.com/EWzojWoFYh

meanwhile Donalds isn’t even listening to her pic.twitter.com/U3eT7SJfyz

Boebert is doing some high velocity babbling. “Many millions of Americans are impressed with the work of Byron Donalds.”
Even
More millions wouldn’t know him if he sat in their laps.

Rep. Byron Donalds was non-committal over how long he plans to stay in the race.

“What I’m committed to is making sure that we get a deal so we can elect a speaker and then get back to governing,” he told me

I felt like the 20 Republicans’ strategy went something like this: “Dems are rallying around Hakeem Jeffries. Do we have a Black? Are there any Blacks? No, Tim Scott is a Senator, damn it! Oh there’s Brian Donalds. I meant Bryan Donaldson. Whatever. Get him. Anyone but McCarthy.”