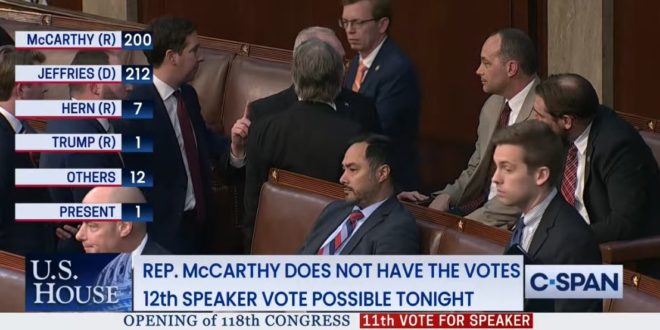 U.S. House GOP leader Kevin McCarthy, R-Calif., lost an 11th vote for House speaker on Thursday, his latest defeat in what has already become the longest speaker balloting process since 1859.

Ahead of the vote, two members of the bloc of 20 Republican holdouts opposing McCarthy’s speakership formally nominated alternative candidates to McCarthy: The first pick was GOP Rep. Kevin Hern of Oklahoma, who leads the influential Republican Study Committee.

The second nominee was former President Donald Trump, who was nominated by his longtime ally, Florida GOP Rep. Matt Gaetz. Hern has consistently voted for McCarthy for speaker, but he has not said outright that he would reject the job if McCarthy withdraws his name.

Newly elected freshman Rep. George Santos, who is facing a scandal over his resume and claims he made on the campaign trail, makes a gesture with his left hand as he casts his vote for House Republican Leader Kevin McCarthy, U.S., January 5, 2023. REUTERS/Evelyn Hockstein pic.twitter.com/cLJKflniHf

Rep. Matt Gaetz (R-FL): “President Trump, I believe, is the first president in my lifetime that didn’t start any new wars.”

Rep. Steve Cohen (D-TN) shouts back that Trump “started a war in the House and tried to overthrow our government.” pic.twitter.com/EQU4IYSVx3

There will be an 11th ballot, moving the 2023 Speaker election into a tie with 1839 for the 6th longest ever https://t.co/jYhrZcIWdO

MTG to me: “I’m not sure how Lauren Boebert on one hand can demand so much out of Kevin McCarthy, but then demand nothing out of someone else and be willing to vote for them to be speaker.That’s not serious, I don’t think that’s leadership and I really see it as more obstruction” pic.twitter.com/1AdYmBDuZm