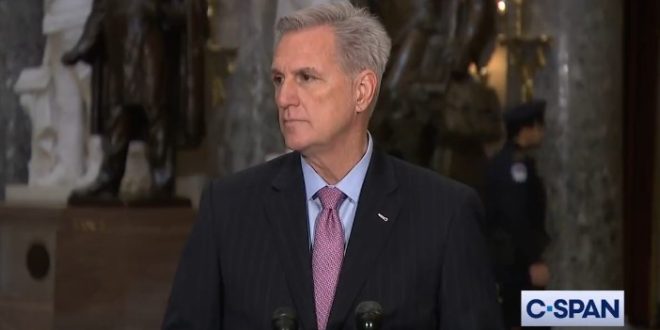 House Speaker Kevin McCarthy said today that while he stands by Rep. George Santos, the freshman congressman from New York would be removed from office if the Ethics Committee finds he broke the law after he admitted fabricating parts of his background. Asked whether he is standing by Santos because his resignation would cut into the House Republicans’ narrow majority, McCarthy pushed back.

“No. You know why I’m standing by him? Because his constituents voted for him,” McCarthy said. “I do not have the power simply because if I disagree with somebody or what they have said that I remove them from elected office. If for some way when we go through Ethics that he has broken the law, then we will remove him, but it’s not my role,” McCarthy said. “I believe in the rule of law. A person’s innocent until proven guilty.”

Kevin McCarthy just snapped at reporters who asked him a string of questions about his support for George Santos, including how he can justify seating him on committees while he blocks Democrats from serving on particular ones. https://t.co/m8TrtPuCil

While Speaker McCarthy denies experienced, qualified Democrats committee seats, he puts serial fraudster George Santos on 2 of them. This harms the integrity of our democratic institutions and weakens national security. @SXMPOTUS @juliemason pic.twitter.com/4caEjt39Q3

House Speaker Kevin McCarthy said Rep. George Santos could be removed from office if the chamber’s Ethics Committee determined that he had broken the law, but not until then https://t.co/eQEGnde1Yv pic.twitter.com/Gh7GueJTpW