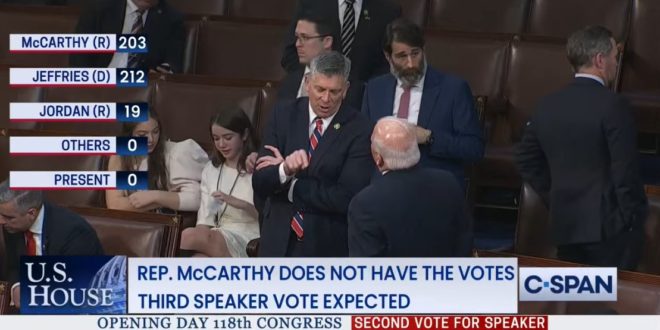 House GOP Leader Kevin McCarthy fell short in his bid for the Speakership for a second time on Tuesday. Nineteen Republicans voted for Rep. Jim Jordan in the second round so far, all but guaranteeing that the gavel is still out of McCarthy’s reach. To win, the embattled legislator cannot lose more than four members.

Jordan nabbed six GOP votes in the first round, despite previously stating that he did not want the job.

Nineteen House Republicans backed someone other than McCarthy in the initial vote. McCarthy ended up finishing second behind House Democrats’ new leader Hakeem Jeffries. McCarthy clinched 203 votes, while Jeffries won the support of all 212 members of his caucus.

Rep. Nancy Pelosi (D-CA) casts her vote for Hakeem Jeffries to succeed her as House Speaker.

Her vote underscores Democratic unity amid Republicans’ chaos: this election is set to be the first time in over a decade that either party has seen zero defections in the Speaker vote. pic.twitter.com/rKoI3vQxdR

Here are the 19 House Rs who voted vs. McCarthy:

JUST IN: Enough Republicans have already voted for Rep. Jim Jordan to deny Rep. Kevin McCarthy the speakership in a second ballot.