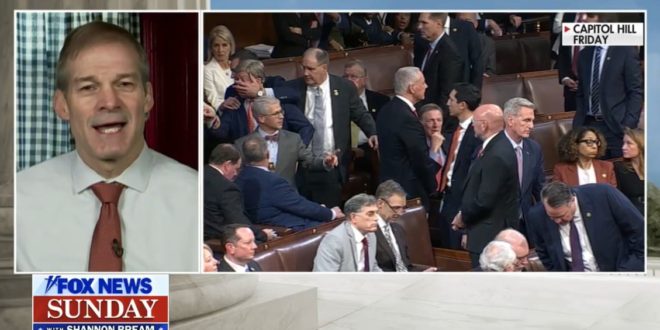 During an interview on Fox News Sunday, host Shannon Bream noted that “things got really ugly” on the House floor because Rep. Mike Rogers (R-AL) had to be stopped from physically confronting Rep. Matt Gaetz (R-FL) during a Friday night vote for Speaker.

“Kevin McCarthy got the same number of votes that Pelosi got,” Jordan scoffed. “She had the same majority number, 222, that we have this time. So sometimes democracy is messy. But I would argue that’s exactly how the Founders intended it.”

Who knew that the best way to end a congressional stalemate with the Freedom Caucus was to have a drunk guy in a wig attack Matt Gaetz.

“I would argue that’s exactly how the founders intended it” — Jim Jordan on Fox News Sunday in response to a question about Republicans nearly coming to blows on the House floor pic.twitter.com/5p56KOIAfi

JIM JORDAN: Don’t tell us problems at the border were Republicans’ fault, for goodness’ sake

BREAM: But during the Trump years, there was a point where Republicans controlled everything, & it didn’t get fixed then either

JORDAN: No, it was fixed then…we were building the wall pic.twitter.com/ZLD9ZwWOdI

Gaetz was photographed flexing after his argument with Mike Rogers (Getty) pic.twitter.com/HnY6UL7q8I

And this toupee wearing Rep Mike Rogers M’erF’er got so steaming mad that Matt Gaetz wouldn’t vote for McCarthy, even tried to throw hands, but was calm, almost zen, when a-holes stormed our Capitol and even voted to overturn our elections. So spare us the Roadhouse routine. pic.twitter.com/62liPOKyQ2

As tensions boiled over on the House floor during the speaker votes, Republican Mike Rogers of Alabama started to charge toward Matt Gaetz before Richard Hudson physically pulled him back.