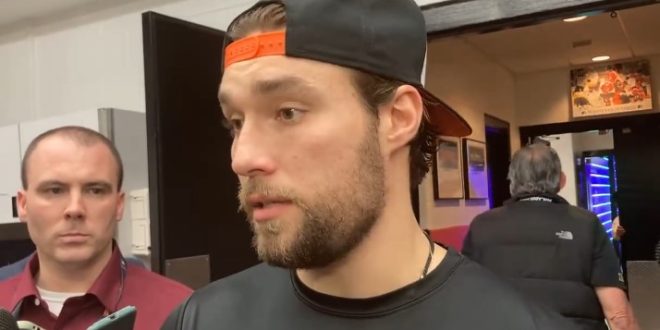 As someone who’s been a season ticket holder of the Washington Capitals since before Alex Ovechkin could drive, the idea of sitting through another NHL Pride Night — when everything we love about hockey is drenched in politics and phony rainbow pageantry — was a non-starter.

So we sold our tickets for Tuesday’s game. Unfortunately, not everyone who wants to sit out the league’s pandering can make such an easy choice. But for Philadelphia Flyers’ defenseman Ivan Provorov, easy isn’t what mattered. Staying true to his convictions was.

While his team was wrapping their sticks in rainbow tape and skating onto the ice like an advertisement for the Human Rights Campaign, Provorov waited in the locker room, ready for warm-ups — and the NHL’s annual LGBT lovefest — to be over.

His decision to opt out of the special Pride jerseys and forced worship of an in-your-face agenda, was brave, especially for a league that’s increasingly following in the woke footsteps of sports’ other big three: the NFL, NBA, and MLB.

Instead of living and letting live, like the Left claimed it wanted all those years, the mob demands 100% conformity now. That means bowing down to their altar of sexual confusion — or else.

The above has also been posted to the Washington Stand, the FRC’s recently-launched “news” site.

Ivan Provorov’s decision to opt out of the special Pride jerseys during NHL Pride Night was brave.
“I respect everybody, and I respect everybody’s choices. My choice is to stay true to myself and my religion. That’s all I’m going to say.” @josephbackholm https://t.co/OiU4KUW2c3