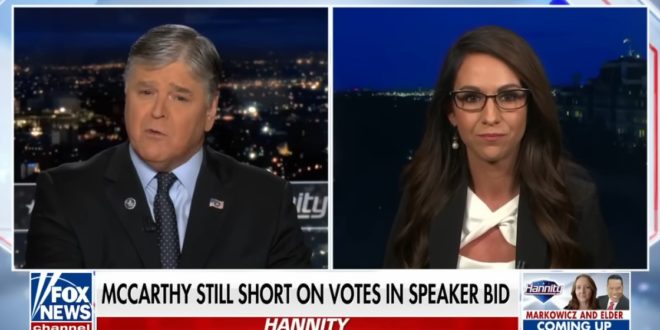 Hannity Roasts Lauren Boebert: Is This A Game Show?

“Isn’t it time for you and your side to pack it in considering he [McCarthy] has over 200 [votes] and you have 20?” Hannity asked the Republican congresswoman.

Later, after Boebert suggested she might nominate former President Trump, who has urged all Republicans to support McCarthy, Hannity scoffed, saying, “Is this a game show? Like we’re gonna pick Jim Jordan one day, Trump the other day?”

MAGA sites, most notably The Gateway Pundit, are furious at Hannity over the very combative exchange which you can view in full in the second clip below.

Boebert: Maybe I should nominate Donald J. Trump tomorrow.
Hannity: Is this a game show? pic.twitter.com/BcLXlCMrf0