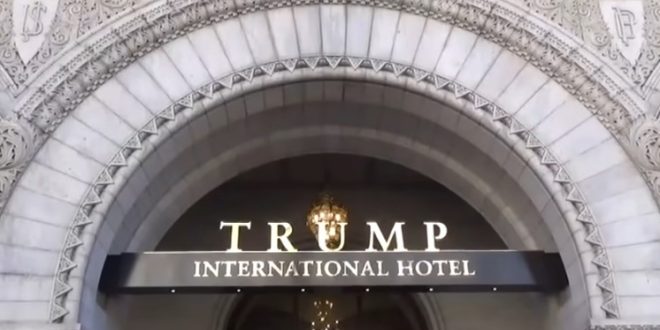 Republican spending at the infamous DC hotel that was once owned by former President Donald Trump has dwindled to a pittance since he sold it, FEC records show. The glittering Trump International Hotel housed and entertained numerous Republican officials, candidates and lawmakers throughout the Trump presidency.

But a new report from the ethics watchdog Citizens for Responsiblity and Ethics in Washington (CREW) says that the flow of money all but stopped after the golden letters spelling “TRUMP” came down from the building’s facade. An examination of FEC records show that the GOP has spent just under $2,000 there since Trump handed over the lease.

From the CREW report:

Representative Kevin McCarthy disregarded concerns about spending at Trump International, and said that Trump’s properties are “just like any other hotel.” Throughout Trump’s presidency, McCarthy’s committees spent over a quarter-million dollars at Trump properties and earned Trump’s support for his bid for Speaker of the House.

The day after T-Mobile announced its merger with Sprint, nine T-Mobile executives stayed at Trump Hotel. CEO John Legere tweeted that the hotel was “convenient” and that the stay would not “have any influence on regulatory decisions.” Trump later approved the merger.

If Trump’s D.C. hotel really was just “convenient” and like “any other hotel,” then the Waldorf Astoria should be equally as popular as its predecessor. Instead, spending from Republicans at the new hotel is negligible, suggesting what they really bought from Trump was much more than cocktails and event space.

The Waldorf Astoria is in the same “convenient” location and the public areas remain largely unchanged, but from its opening in June through the midterms, GOP groups spent just $2k there, compared to $867k spent there in the same period leading up to the 2018 midterms.

Republicans said they chose Trump’s DC hotel out of convenience. They’ve spent almost nothing there since he sold it. https://t.co/7qN9ANSHbu