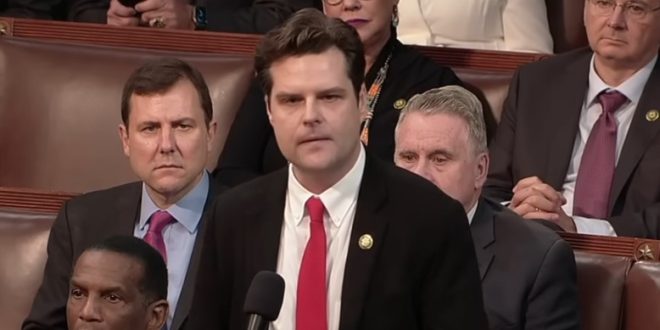 Gaetz: McCarthy Is “Squatting” In The Speaker’s Suite

Florida Rep. Matt Gaetz is accusing Rep. Kevin McCarthy of squatting in the speaker’s suite, despite not having landed the job yet. Gaetz included in his tweet a copy of a letter dated January 3, which he sent from his congressional office to J. Brett Blanton, the Architect of the Capitol.

“What is the basis in law, House rule, or precedent to allow someone who has placed second in three successive speaker elections to occupy the Speaker of the House Office?” Gaetz questioned. “How long will he remain there before he is considered a squatter?”

The Speaker of the House Office in the Capitol is currently being occupied by Kevin McCarthy.

Kevin McCarthy is not the Speaker of the House. He lost 3 consecutive votes today.

I’m demanding answers from the Architect of the Capitol. pic.twitter.com/AIZ8bFks6W