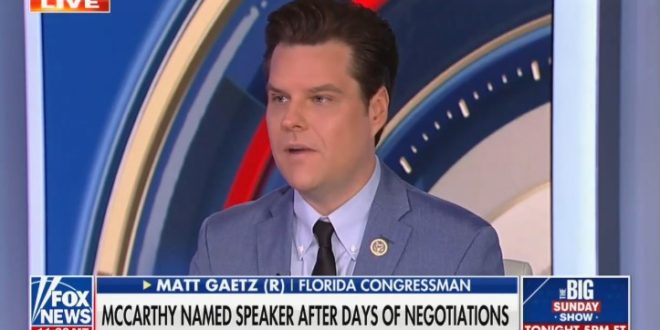 “Speaker McCarthy is our speaker and long live the Speaker. I look forward to working closely with him. But he did agree to his great credit to democratize power to the membership.

“I don’t really get the critique that taking from Tuesday to Friday to work this out puts the Republican majority in peril. I mean, you know, Mike, that in the summer, the entire Congress takes like six weeks off where we’re not even around at all.

“So to take four days to figure out who’s going to be second in line to the presidency and to ensure that we have a House of Representatives that is a fighting force going to check the Biden administration? Absolutely worth it.” – Matt Gaetz, today on Fox News.

As you’ll see in the clip, the Fox host openly wondered if Gaetz’s crusade against McCarthy wasn’t performative trolling meant to earn himself headlines and campaign donations.

Fox News Anchor Puts the Screws to Matt Gaetz Following McCarthy Circus: ‘Do You Consider Yourself a Serious Legislator?’ https://t.co/Lt3n553xYM