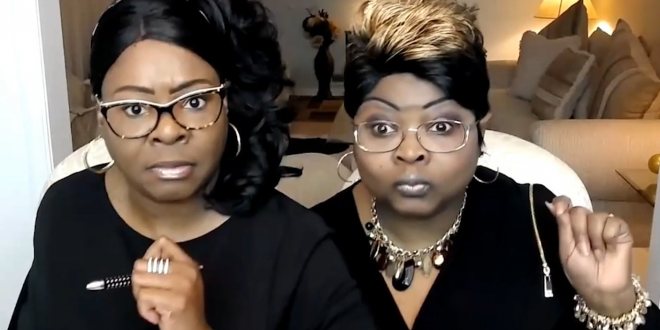 Diamond Of Diamond & Silk Dies Of Something

Lynnette Hardaway, better known as “Diamond” of Diamond and Silk, the right-wing YouTubers and media personalities who bill themselves as “President Trump’s most loyal supporters,” died Monday, according to the duo’s official Twitter account.

Hardaway’s age at the time of her death was not made public, nor was her cause of death. However, the announcement did include a link to a GoFundMe campaign established by Hardaway’s sister.

The vloggers became social media stars and frequent Fox News guests throughout Trump’s tenure as commander-in-chief — including appearances with Trump in the Oval Office. Hardaway’s health sparked concern back in November after the duo’s official Twitter account pleaded with fans to pray for her.

“Anyone who believes in the power of prayer please pray for Diamond,” the tweet read, however, a reason for the sudden plea was never given.

The sisters were fired from their Fox News roles back in 2020 for promoting conspiracy theories about COVID-19. They also claimed on-air that death figures from the virus were being manipulated to ruin Trump’s image.

Because Diamond and Silk are held to a higher standard than, y’know, whoever was president back then.
RIP

I’m seeing claims that Diamond of Diamond and Silk—a Covid-19 vaccine hater—died of Covid and was hospitalized for it in Nov. But truth is her cause of death isn’t clear yet, and the Nov. claims that she had Covid came from a Blavity article that appears to have been deleted.

The Blavity article is still up on MSN, so you can read it and see that the Covid claim isn’t sourced to anything. The article just asserts it with explaining where they’re getting that idea. https://t.co/4DqM1nRAvx

My friend died. Give me money. https://t.co/RBVk5fhwBP

Be a diamond, not Diamond.

Protect yourselves and get vaccinated.

One vaccine is not enough. Covid has mutated and you need the most recent vaccine to maximize the protection you can get.

Do it for the people who love you, but mostly, do it for yourself. https://t.co/m8f0wq02fH

Trump shares news that Diamond, of the MAGA duo Diamond and Silk, has died: “Diamond’s death was totally unexpected, probably her big and precious HEART just plain gave out.” pic.twitter.com/FtzoaXK0ik

Diamond and Silk: Kamala Harris “is not even Black” https://t.co/TWEPPhtEfo