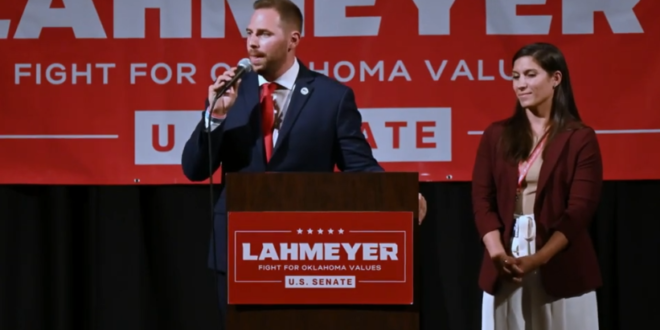 On Monday, far-right wing Christian nationalist Jackson Lahmeyer, the founder of Pastors for Trump, which is working to get the ex-president re-elected, observed Martin Luther King Jr. Day by falsely claiming the civil rights icon who dedicated his life to battling racial discrimination and fighting for equality would have been a supporter of Donald Trump and his “MAGA” movement. Lahmeyer tried to unseat U.S. Senator Jim Lankford (R-OK) in the GOP primary last year, but failed.

Read the full article. As you can see below and as was widely reported during his Senate campaign, Lahmeyer is among the looniest of QAnon nutbags.

Pretty sure if Dr. King were alive to today that he would be MAGA 🇺🇸

MAGA pastor Jackson Lahmeyer is now essentially selling religious exemptions, telling anyone who doesn’t want to take a COVID vaccine to donate to his church in order to become an “online member” and then he’ll sign an exemption form for them as their pastor. pic.twitter.com/Z0hTNb3vKt

MAGA pastor Jackson Lahmeyer used his Sunday sermon to declare that BLM is demonic: “The organization called Black Lives Matter is operating under the spirit of Jezebel. Did you know that organization was founded by witchcraft-practicing lesbians?” pic.twitter.com/jDFNeFGMuc

Right-wing pastor Jackson Lahmeyer’s prayer that God will remove politicians “that do not submit to your authority” and replace them with “men and women who will obey your command” seems a bit self-serving, given that he’s trying to unseat Sen. James Lankford in the GOP primary. pic.twitter.com/99Ayllhd88

MAGA pastor Jackson Lahmeyer shows off his “flamethrower” and announces plans to use it in a video that “is gonna cause a lot of liberal tears”: “I gotta go shoot a video with my flamethrower and we’re gonna make some liberals cry.” pic.twitter.com/rk9qMqNhaM