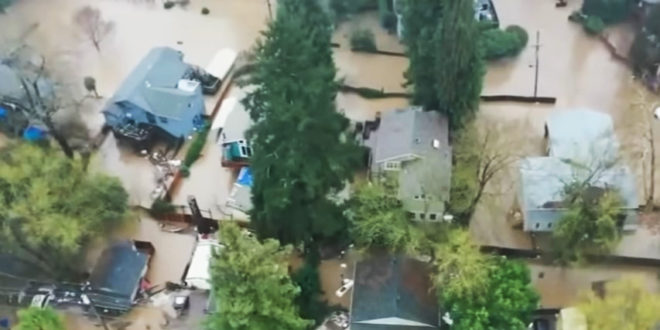 Thousands of people in California were forced to flee their homes as severe weather continued to batter the state, leaving one person dead this week and a child missing, while tens of thousands of utility customers were still without power Tuesday morning.

Moderate to heavy rains were expected to continue to hammer much of California on Tuesday as a fresh low-pressure system barreled towards the state as part of a “parade of cyclones” that prompted a string of rescues on Monday. Homes were flooded, streets transformed into rivers and cars were swamped amid the deluge.

Just as one episode of heavy rains across the state began to wind down, another low-pressure system rapidly gained strength off the West Coast, barreling toward the state, according to the National Weather Service.

The entire community of Montecito and surrounding canyons scarred by recent wildfires were under an evacuation order that came on the fifth anniversary of a mudslide that killed 23 people and destroyed more than 100 homes in the coastal enclave.

In Los Angeles, a sinkhole swallowed two cars in the Chatsworth area on Monday night. Two people escaped by themselves and firefighters using ropes and an aerial ladder rescued two others who had minor injuries, authorities said.

Ellen DeGeneres shared an Instagram video of herself standing in front of a raging creek near the Montecito home where she lives with her wife, actor Portia de Rossi. She said in the post that they were told to shelter in place because they are on high ground.

Montecito is under mandatory evacuation. We are on higher ground so they asked us to shelter in place. Please stay safe everyone. pic.twitter.com/7dv5wfNSzG

Tremendous waves in Carmel-by-the-sea, CA. Longtime residents say they haven’t seen waves like this in 25 years. Waves and flooding on the Carmel River closed several coastal roads. @weatherchannel continues coverage of the latest #AtmosphericRiver to batter the #California coast pic.twitter.com/DseTWiZRGM

California has gone from extreme drought to extreme flooding in a matter of days.https://t.co/V2Ov9YTzYI

A powerful storm, tied to what the National Weather Service described as “a steady stream of atmospheric river events,” continues to impact parts of California as heavy rain causes flooding in the state. https://t.co/5zkUEUZDl4 pic.twitter.com/WgAfBHrefN

A look at the impact the #AtmosphericRiver is having on California. Major flooding yesterday, this video in Santa Barbara. #WeatherMadeSimple pic.twitter.com/TvgKgv2so1