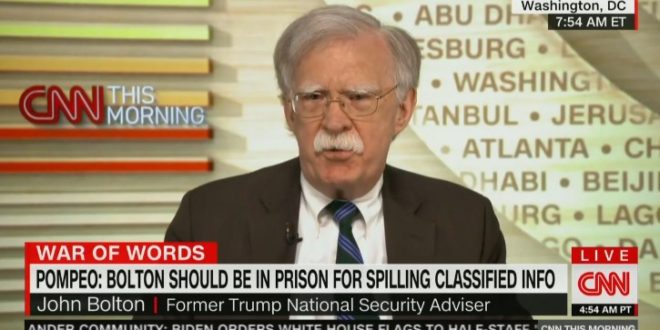 Bolton Hits Back At Pompeo’s Call To Imprison Him

Pompeo describes Trump calling John Bolton, his third national security adviser, a “scumbag loser”. After being fired, Bolton produced a memoir of his own, The Room Where It Happened. Trump sought to prevent publication but the book was a bestseller.

Bolton has now floated a White House run of his own, to try to block Trump. Pompeo fires salvos Bolton’s way, at one point comparing him to Edward Snowden, who leaked surveillance secrets to the media in 2013, but saying the National Security Agency contractor “at least had the decency not to lie about his motive”.

Bolton, Pompeo writes, should “be in jail, for spilling classified information.” Pompeo also says he hopes one day to testify at Bolton’s trial on criminal charges.

Bolton hit back this morning on CNN:

What he knows, in fact — or should know — is that my book went through a four-month-long pre-publication review process precisely to make sure there was no classified information in the book. It was arduous at times, I can tell you.

The National Security Council senior director responsible for that review cleared the book. And inside the White House, because Donald Trump didn’t want the book published before the election, he fired the senior director, a career employee of the National Archives, from her job and tried to get another review going.

If he [Pompeo] didn’t know about it, it’s incompetence in writing the book for not checking out the facts before he put it down on paper. And if he did know about it, that’s malicious and well beyond reckless to say things like that.

The clip is entertaining.