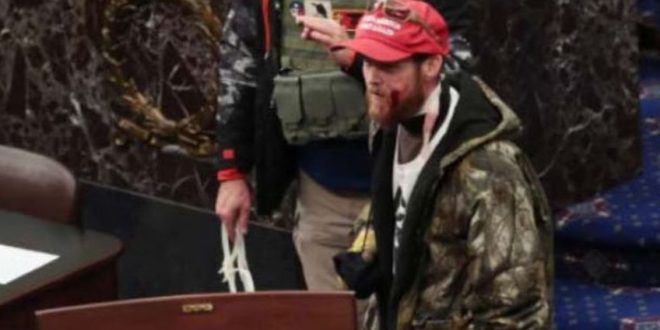 A federal judge on Friday ruled that a Jan. 6 defendant — who said he surged onto the Senate floor to “plead the blood of Jesus” and absolve the chamber of evil spirits — could not be convicted of obstruction of Congress’ joint session, the most serious felony charge he faced.

After a weeklong bench trial, U.S. District Court Judge Amy Berman Jackson ruled that Joshua Black had a “unique stew in his mind” that left her uncertain whether he was aware that his actions were unlawful. Black is the first Jan. 6 defendant who reached the Senate floor to be acquitted of the obstruction charge.

Jackson found Black guilty of other charges he faced, including disorderly conduct in a restricted building while carrying a dangerous weapon — a knife — a felony that carries a maximum 10-year sentence. By the time he arrived at the Capitol, Black believed that the certification of the election had ended, Jackson noted.

👀 Judge Amy Berman Jackson just *acquitted* Jan. 6 defendant Joshua Black (pictured on the floor of the Senate) of obstruction because she said prosecutors presented no evidence he intended to stop (or even knew about) Congress’ session that day. pic.twitter.com/AEBufPQPkf

This was a bench trial, so ABJ held herself to a reasonable doubt standard. Defense argued that Black believed the certification of the election had ended by the time he got into the Capitol. Prosecutors didn’t present evidence otherwise, she said.

ABJ has been one of the most thoughtful (and toughest) judges on Jan. 6 defendants. https://t.co/wkhk7mpJ8Rhttps://t.co/3uG7N1EZ01

She clearly struggled with Joshua Black’s case — and has since his detention hearing.