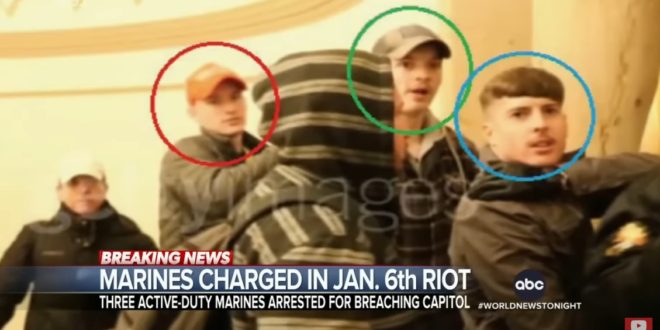 Joshua Abate, Micah Coomer, and Dodge Dale Hellonen are accused of entering the building through the Senate Wing Door at around 2:20 p.m. that day. Weeks after Jan. 6, Coomer (red circle above) indicated that the deadly riot didn’t go far enough.

“Everything in this country is corrupt,” he wrote to another unidentified Instagram user. “We honestly need a fresh restart. I’m waiting for the boogaloo.”

“I agree but what’s a boogaloo?” the user asked. “Civil war 2,” Coomer replied. The “boogaloo,” according to adherents to the right-wing anti-government philosophy, is a slang reference to a future civil war, according to hate group monitors.

According to the George Washington University’s program on extremism, with these cases included, 121 of the 943 defendants charged in the Capitol riot are current or former members of the military, or around 12% of the cases.

“Investigators first learned of the three men when they found photos from inside the Capitol that Coomer had posted on Instagram including the caption ‘Glad to be apart [sic] of history.'” Coomer also said “I’m waiting for the boogaloo.” https://t.co/iAxzgVLQAd