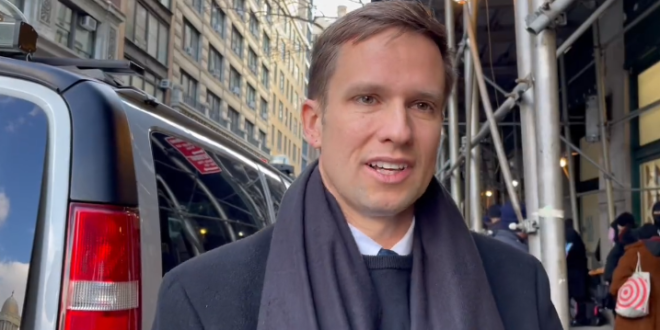 Two people were arrested Monday for breaking into a New York City Council member’s apartment building as crazed anti-LGBTQ activists targeted the pol, police said. The individuals, said to be furious over a recent drag story time session at a Manhattan library, targeted Councilman Erik Bottcher’s home and office, according to cops.

The group call themselves “gays against groomers,” the lawmaker said in a tweet. They struck first at the Democrat’s Chelsea office around 3 p.m., cops said. Later, the group gathered outside the councilman’s apartment building, chalking hateful, threatening phrases on the sidewalk.

Two women broke into the building around 5 p.m., prompting Bottcher’s superintendent to call the police.

Protesters trying to shut down a reading event geared toward neurodiverse children at a branch of the New York City Public Library were met by a wall of counterprotesters.

The group demonstrating on Saturday brought handmade signs covering a spectrum of issues, with messages protesting everything from fascism to grooming to gender identity.

A representative for the New York Public Library said the event went on as planned and added that the library would continue to offer programs supporting diverse voices.

Tonight the Drag Story Hour protesters came to my apartment building and gained entry. My super called the cops and two of them were arrested for trespassing. This is pure hate, unmasked. If they think this is going to intimidate us, they’re mistaken. Our resolve is strengthened. pic.twitter.com/i45eyGg1AS

Stay strong. Sorry you’re going through this. Says more about them than you.

This bigotry is disgusting.

I’m glad you’re safe @ebottcher, and I’m standing with you.

Erik, you stand up for our city every single day and these cowardly bigots have no place here.

Thank you to the NYPD for your quick work and sending the message that this hate will not go unchallenged. https://t.co/o6SlUzikHc

I stand with my friend @ebottcher, Drag Queen Story Hour, and the LGBTQ+ community against this disgusting display of hate.

Elected officials have a responsibility to condemn this false, dangerous rhetoric that’s being used as a new way to discriminate against the community. https://t.co/BPeM3gwHxo

The comments on this post are vile and bigoted and make me so sad. I’m hopeful that one day we’ll look back at them and remark on how far we’ve progressed as a society. https://t.co/iOhMvBPyX4

Here’s an idea: if you don’t like Drag Story Hour, don’t go to it. @ABC7NY covers the incidents in Chelsea yesterday when hate-consumed protesters tried to force their way into the library. I’m proud of our community for standing up and against vile hatred. pic.twitter.com/bmDS4JPc2s

I asked @ebottcher what the Drag Story Hour event today was like. He said they sat on the carpet, read books any other kid would read, and colored. “It was totally benign.”

Bottcher was interrupted by Juliette Germanotta who refused to believe the books were just kids books. pic.twitter.com/tDqlLE1HT0

Today I witnessed pure hatred and bigotry outside Drag Queen Story Hour at a public library in Chelsea.

Inside, I witnessed a loving and peaceful reading of children’s books to kids.

Previous MTG And Lauren Boebert Taking Their Infighting Public
Next Musk: Only Those Who Pay The $8 Can Vote In My Polls