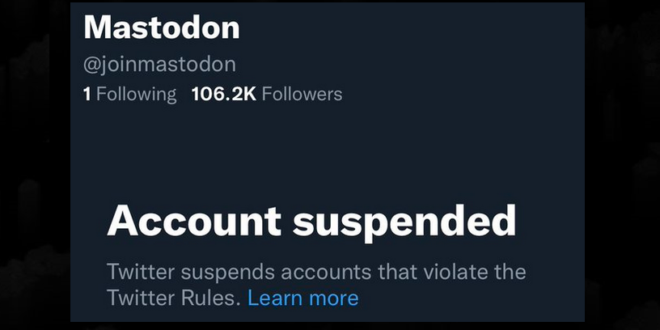 The Twitter account encouraging people to join rival social network Mastodon has been suspended, the latest in a string of accounts suspended this week. The usual feed for @JoinMastodon was replaced Thursday with a message the account had been suspended for violating Twitter rules.

Another victim of the Free Speech Absolutist. pic.twitter.com/zZygA6QJ5d

There’s a reason it’s called the Bill of Rights and not the Bill of feelings. #BillOfRightsDay #Constitution pic.twitter.com/oypJcV6KVz

Telegram users have been self-destructing messages since the beginning – and now they can set a custom account-wide timer to auto-delete all messages in new chats. You can also easily enable auto-delete in your existing chats from the same menu. #TelegramTips pic.twitter.com/8IDM7XaVqs

Among many other things It’s Going Down did is round up the comings and goings of far-right extremists every week.

I know of nothing they ever did that would merit a suspension on this site.

Previous Trump Melts Down Over Polls Showing DeSantis Ahead
Next CHATTER AWAY: Overnight Open Thread