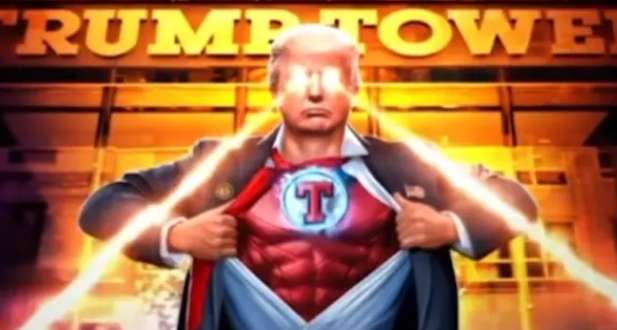 Former President Donald Trump teased an upcoming announcement with a superhero-themed video Wednesday, baiting his Truth Social followers with a promise of a major announcement the following day.

Trump’s team didn’t immediately respond to The Post’s inquiries, but speculation swirled on social media about what the announcement might be.  Guesses include Trump announcing a return to Twitter after CEO Elon Musk restored his account on Nov. 19.

Other possibilities include Trump announcing his intended running mate or a long-shot bid to become speaker of the House of Representatives, which doesn’t require the officeholder to actually be a House member.

Some Twitter wags think Trump might announce he’s switching to an independent run for the White House.

Others are predicting he’ll tap Vaseline Woman as his running mate. Kari Lake has basically been living at Mar-A-Lago for the last couple of weeks.

Or, of course, it could be the usual nothing burger.

Whatever the case, the mocking of the superhero imagery has been delicious.

“I will be making a MAJOR ANNOUNCEMENT tomorrow. Thank you,” Trump wrote on TRUTH social pic.twitter.com/pBgtTZmoDw

Saying “America needs a Superhero,” Trump says he will make a major announcement tomorrow. It’s in ALL CAPS so either it’s a MAJOR announcement, or he’s yelling it.
What would be the right superhero name for him?
We’ll start: Malignant Man