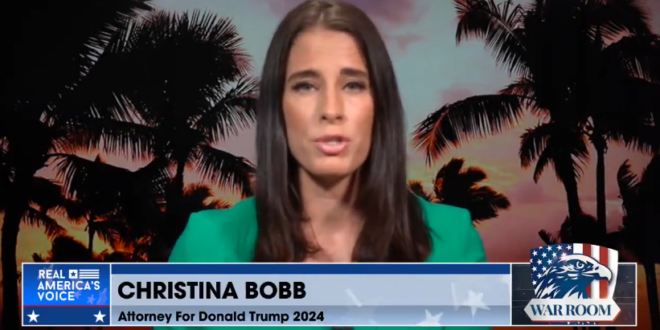 Trump Lawyer: Kari Lake Suit Could Get Him Reinstated

A lawyer for Donald Trump has said that Republican candidate for Arizona governor Kari Lake’s election midterm lawsuit might somehow help the former president return to the White House. Attorney Christina Bobb made the remarks during an appearance on Real America on OANN while discussing Lake’s legal attempts to have the Arizona gubernatorial election, which she lost to Democratic Katie Hobbs, thrown out.

OANN host Dan Ball asked Bobb that if Lake wins and proves that Arizona’s elections are “screwed,” whether Trump could also prove he was “screwed” out of the election he lost more than two years ago. “Well, it’ll be interesting,” Bobb, herself a former OANN host, replied. “You know, I don’t know. I mean one state as we know. We would need three states, so I wouldn’t necessarily say right away, certainly maybe down the road.”

Trump attorney Christina Bobb said that the Arizona gubernatorial candidate’s legal action could have knock-on effect “down the road” for the former president. https://t.co/lNf7BiANed

Wait a minute, Trump’s being interviewed by his current employee Christina Bobb, who besides being on Trump’s payroll is embroiled in the whole Mar-a-Lago drama?!?! https://t.co/FghqnwjIGa