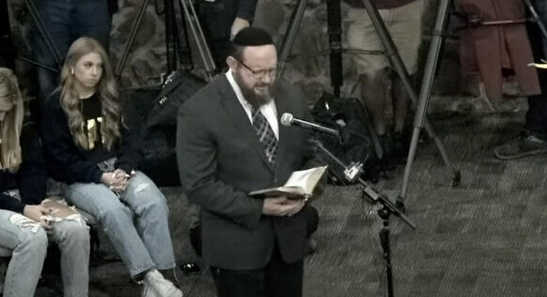 On Monday, the board of Keller Independent School District introduced that evening’s prayer leader as “Rabbi Griffin.”

A man wearing a suit and kippah then approached the podium and recited the priestly blessing in Hebrew. “Grant us, Adonai, your mind tonight so we can be a blessing to our community, to our children,” he continued. “Bring Shalom, nothing missing, nothing broken, to this meeting tonight.”

But this was not an ordinary rabbi, or an ordinary school board meeting. Keller is the district that, earlier this year, ordered its libraries to remove all copies of a 2018 graphic novel adaptation of Anne Frank’s diary from shelves. And “Rabbi Griffin” is Mark Aaron Griffin, a Messianic Jew who last year was charged with multiple counts of sexual assault.

According to the indictment, he is accused of using his stature as a “rabbi” to sexually assault a woman in March 2020 after coercing her to become his “concubine” and citing Abraham and Jacob as examples of spiritual figures who enjoyed multiple partners. The victim claimed she had been assaulted in Griffin’s congregation, including in his office, which DNA samples seemed to corroborate, a warrant said.

Griffin’s congregation, Sar Shalom Synagogue, says its adheres to “Yeshua Centered Judaism,” using a Hebrew name for Jesus. Mainstream Jewish denominations consider the movement to be Christian and decry its attempts to win converts. Keller’s board reportedly began its policy of holding opening convocations after its newest members, several of whom were backed by right-wing groups, were elected in May.

According to a local watchdog, the school board claimed no knowledge of charges pending against the “rabbi.” She also reports that when she asked why other faiths haven’t been invited to give the opening prayer, she was told that “the prayer was intended only for the school board trustees, who all believe in Jesus.”

The Texas school board that banned a graphic novel adaption of Anne Frank’s diary invited a Messianic “rabbi” charged with sexual assault to offer a prayer at its meeting. https://t.co/lW1h7atZOd