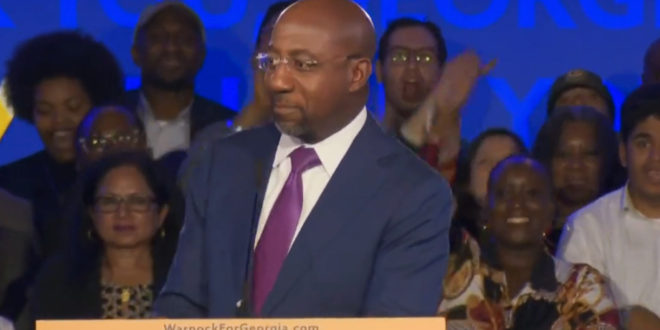 “After a hard-fought campaign — or should I say campaigns — it is my honor to utter the four most powerful words ever spoken in a democracy: The people have spoken,” Warnock, 53, told jubilant supporters who packed a downtown Atlanta hotel ballroom.

“The numbers look like they’re not going to add up,” Walker told supporters in a concession speech late Tuesday at the College Football Hall of Fame in downtown Atlanta. “There’s no excuses in life and I’m not going to make any excuses now because we put up one heck of a fight.”

Thank you, Georgia. We did it again. pic.twitter.com/jikuO5Kt8S

“The numbers doesn’t look like they gonna add up.” pic.twitter.com/4IrqxrNo9W

Sen. Raphael Warnock thanked his mother at his victory speech: “She grew up in the 1950s in Waycross, Georgia, picking somebody else’s cotton and somebody else’s tobacco. But tonight, she helped pick her youngest son to be a United States senator.” https://t.co/IraSKhFkBg pic.twitter.com/u0Qo5mvC4X