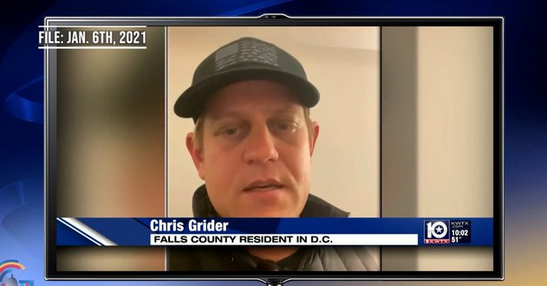 A Texas man who attempted to cut power to the U.S. Capitol Building on Jan. 6 was found guilty Wednesday of seven criminal counts by a D.C. judge.

Christopher Ray Grider waived his right to a jury and instead sat for a bench trial. Grider was arrested last January and indicted on eight counts, including three felony counts of civil disorder and destruction of government property.

Grider told a reporter during an interview with KWTX in Waco, Texas, that he’d been inside the Capitol and had been just feet away from U.S. Air Force veteran Ashli Babbitt when she was fatally shot.

MORE: Christopher Ray Grider, of Texas, convicted on all counts for dismantling police barricade, attempting to cut power to the Capitol and damaging Speaker’s Lobby door where Ashli Babbitt was shot. https://t.co/jd9LBVRKJw