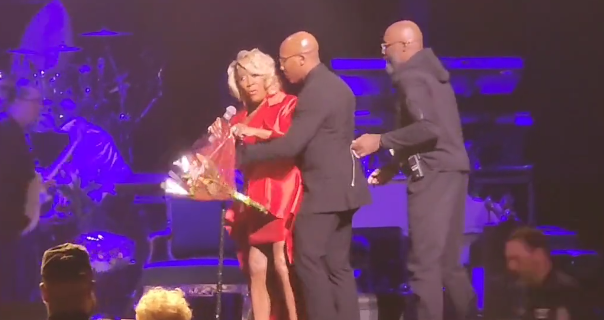 A Christmas concert with Patti LaBelle at Milwaukee’s Riverside Theater came to a sudden and shocking end Saturday night, after a bomb threat forced the R&B legend to leave the stage mid-show and the near-capacity audience to evacuate the theater.

Video taken from the Riverside Saturday shows the 78-year-old LaBelle chatting with an audience member who was celebrating her 70th birthday, and receiving a bouquet of flowers from another fan in the front row, when two men, seemingly her security personnel, briskly walked up to LaBelle at the microphone.

“Wait,” LaBelle cried out as she was swiftly escorted off the stage by the two men. The evacuation happened barely two songs into LaBelle’s performance.

Read the full article. As most of you surely know, Patti LaBelle has a large gay following.

My love goes out to you Patti Labelle. You tried to make it such a loving and joyful holiday and someone had to ruin it for you #pattilabelle #Milwaukee #riversidetheatre #threat pic.twitter.com/VBRqANgA3D

NEW: Message from @MilwaukeePolice regarding a bomb threat at the Patti LaBelle concert at the Riverside theater. pic.twitter.com/LGZyCsfAiD