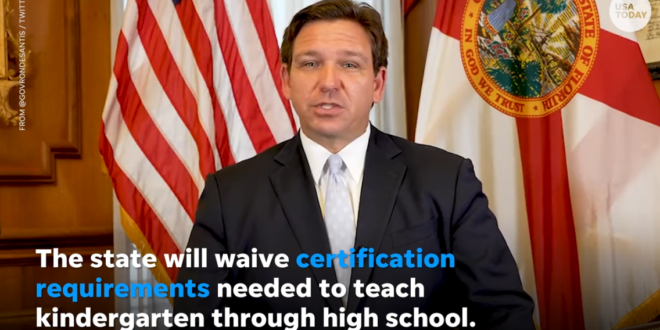 Only 7 Veterans Hired As Teachers Under FL Program

Six months after Florida Gov. Ron DeSantis signed the state’s veteran to teacher certification pathway into law, only a handful of veterans have been approved for certification across all 70-plus school districts, Military.com has learned.

When the school year started in 2022, there were more than 5,000 teacher openings in the state, and the June law was intended to help fill that gap while tackling veteran unemployment. But in total, seven teachers have been hired through the program, a sign that, while the law generated headlines, it’s unlikely to fix the problem.

Florida’s Department of Education emphasized in its rollout of the program in July that the opportunity is meant for candidates “who have not yet earned their bachelor’s degree,” which some educators say could set veterans — and schools — up to fail.

The state has issued a response:

The Department has received over 500 applications for this pathway which are being processed in a first-come first-served manner just like all applications received by the Bureau of Educator Certification.

There has been a false media narrative suggesting the Military Veterans Certification Pathway was created to “fix” a teacher shortage. This is not true. The purpose of this new pathway was to value the unique experience military service provides while simply offering additional time for these veterans to obtain a bachelor’s degree and other requirements to receive a full professional educator certification.

We have a shortage of more than 5,000 teachers in the state of Florida. Ron DeSantis promised his plan to put military veterans in the classroom would solve it—but of the almost 500 veterans who applied, only seven have been approved to be in classrooms: https://t.co/hGbLeoGssa

Previous Musk Claims He’ll Step Down As Twitter CEO After Poll
Next Vaseline Woman: “My Pronouns Are I/Won” [VIDEO]