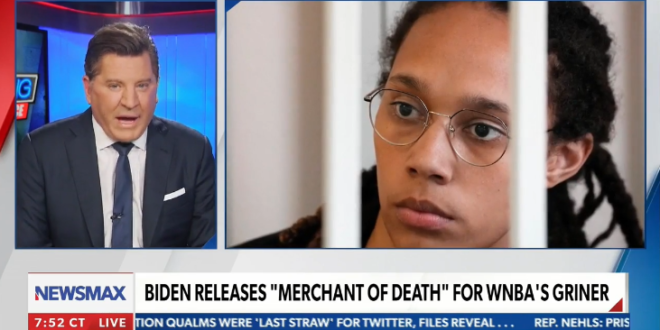 Newsmax host Eric Bolling slammed WNBA star Brittney Griner one day after Russia released her as part of a prisoner exchange. Calling Griner “clueless,” Bolling claimed she “can’t free-throw or hide her stash to save her life.”

Her career free throw percentage is 80.4%, which is actually higher than both the WNBA and NBA average. Bolling went on to call Griner “anti-American” over her past comments that were critical of the U.S.

“Why is a former U.S. Marine still rotting in a Russian jail? I think you know the answer: because he’s a straight White male, the oppressor, and the very person that Brittney Griner and others believe is the problem in America.”

Read the full article. As you’ll see in the clip, Bolling declares that Griner “couldn’t live without her marijuana fix while visiting Russia.”

In 2017, Bolling was fired by Fox News after he “allegedly sent unsolicited lewd text messages and lewd photos to three female colleagues.”

The same day he was fired by Fox, Bolling’s 19 year-old son died of a drug overdose. An autopsy revealed that his son had cocaine, marijuana, Xanax, and fentanyl in his system.

Previous Fauci: I Couldn’t Be Complicit In Trump’s COVID Lies
Next CHATTER AWAY: Overnight Open Thread