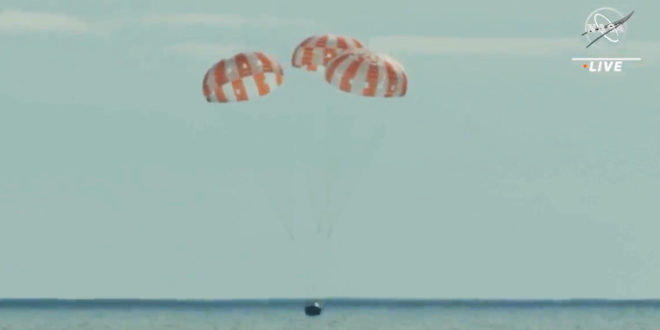 NASA’s Artemis 1 Orion spacecraft returned to Earth on Sunday after nearly a month in space. Artemis 1’s uncrewed Orion capsule splashed down in the Pacific Ocean off the coast of Baja California Sunday around 12:40 p.m.

Orion launched atop a Space Launch System (SLS) rocket on Nov. 16, kicking off the highly anticipated Artemis 1 mission. The capsule slipped into lunar orbit on Nov. 25, then left on Dec. 1. Four days later, Orion fired its main engine during a close lunar flyby to head back to its home planet.

The 25.5-day-long Artemis 1 mission ended Sunday, 50 years to the day that Apollo 17 astronautstouched down on the lunar surface. The duo departed on Dec. 14, 1972, and no humans have been back to the moon since.

After traveling 1.4 million miles through space, orbiting the Moon, and collecting data that will prepare us to send astronauts on future #Artemis missions, the @NASA_Orion spacecraft is home. pic.twitter.com/ORxCtGa9v7

Orion has splashed down off the coast of Baja, California. Our spacecraft is home.