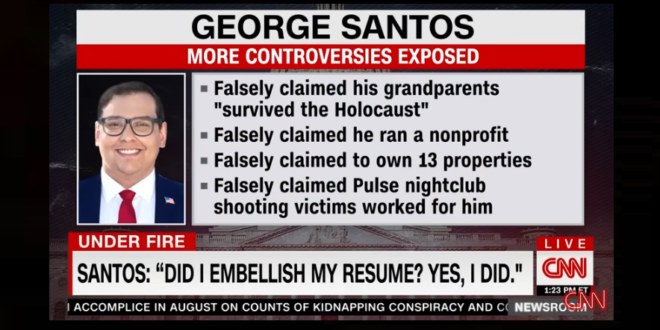 Greene, of Georgia, praised her incoming GOP colleague for supposedly “being honest with his district now” in a series of tweets attacking Democrats on Tuesday.

Misrepresentations of his heritage prompted the Republican Jewish Coalition on Tuesday to disinvite Santos from attending any future group events.

Read the full article. Some of the batshittery in the thread below would have gotten MTG banned under the former Twitter management.

George Santos lied about his resume, and the left is demanding he resign.

Ilhan Omar says she didn’t marry her brother, she lied.
Elizabeth Warren said she was Native American Indian, she lied.
The left said George Floyd didn’t die of a drug overdose, they lied.

Dr Rachel Levine says he’s a woman, he lied.
Adam Schiff said he had proof of Trump Russian collusion, he lied.
Eric Swalwell said he didn’t have sex with a CCP spy, he lied.
Fauci said the taxpayer funded Covid-19 virus didn’t come from the Wuhan lab, he lied.

The science and medical “experts” said the taxpayer funded covid vaccines would stop Covid, they lied, they also said they are safe, they lied again.
The Democrats, J6 committee, and media say Trump and us Republicans organized an insurrection on J6, they lied.

The left doesn’t care about lying.

The real reason they’re attacking George Santos is that he the first openly gay Republican elected and they hate him for it.

I’m glad George is being honest with his district now and look forward to seeing how George legislates & votes.

Fact check: Steve Gunderson (R-WI), who won re-election in 1994, was first openly gay Republican to be elected to Congress. https://t.co/1jwmK760Gi