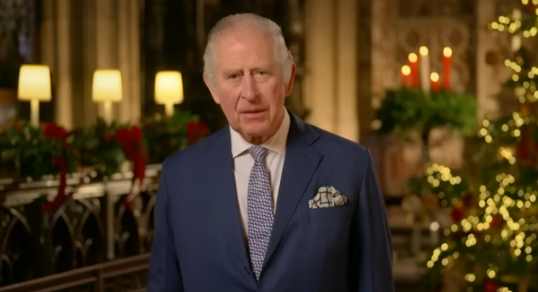 Britain’s King Charles III delivered a message of empathy and unity, and paid homage to the past, in his first Christmas address as monarch — taking up a tradition associated with defining moments in the reign of his late mother, Queen Elizabeth II.

The Christmas message, watched by millions in Britain and the Commonwealth nations, has been a fixture of Christmas Day for nearly a century and offers a lens into the royal family’s views on the state of the world.

For Charles, it marks the end of a tumultuous year, in which his mother celebrated her platinum jubilee and died at age 96, and in which he ascended to the throne.

I am standing here in this exquisite Chapel of St George at Windsor Castle, so close to where my beloved mother, the late Queen, is laid to rest with my dear father.

I am reminded of the deeply touching letters, cards and messages which so many of you have sent my wife and myself and I cannot thank you enough for the love and sympathy you have shown our whole family.

Christmas is a particularly poignant time for all of us who have lost loved ones. We feel their absence at every familiar turn of the season and remember them in each cherished tradition.

My mother’s belief in the power of that light was an essential part of her faith in God, but also her faith in people and it is one which I share with my whole heart.

It is a belief in the extraordinary ability of each person to touch, with goodness and compassion, the lives of others, and to shine a light in the world around them.

This is the essence of our community and the very foundation of our society.

We see it in the selfless dedication of our armed forces and emergency services who work tirelessly to keep us all safe, and who performed so magnificently as we mourned the passing of our late Queen.