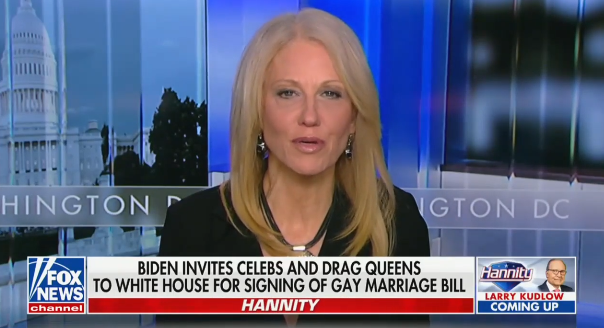 “I want to say, Donald Trump is the first president to come to office already in favor of gay marriage. Mrs. Trump, Melania Trump, was honored one year ago at Mar a Lago by the Log Cabin Republicans.

“Parents, you have every right to speak up, show up, put up and stand up. Don’t ever give up on that, because our kids are the future. They’re are most precious resource. Nobody can tell you otherwise.” – Kellyanne Conway, today on Fox.

Kellyanne Conway, who Fox News hired in October, defended the RNC and Ronna McDaniel during several network appearances around the midterm elections.

What she failed to disclose on air is that the RNC had paid her firm over $800,000 in the past year.https://t.co/af6UNZHAqb

Kellyanne: Donald Trump is the first president to come to office already in favor of gay marriage pic.twitter.com/gIj87P48YV