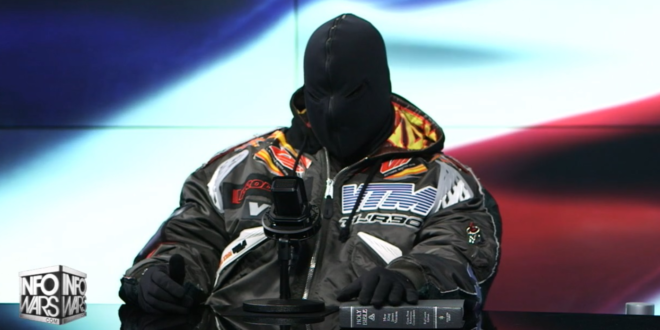 Kanye West: “I Like Hitler, The Nazis Did Good Things”

Kanye West praised Nazi dictator Adolf Hitler during an appearance on Alex Jones’ InfoWars conspiracy broadcast. The rapper, who now goes by Ye, appeared on the right-wing conspiracy broadcast alongside white nationalist Nick Fuentes, a week after the pair met with former president Donald Trump at his Mar-a-Lago resort. “That’s right, you’re not Hitler, you’re not a Nazi, you don’t deserve to be called that and demonized,” Jones said. West, who was wearing a black mask covering his entire head and face, declined to accept Jones’ offer.

This InfoWars appearance has already gone off the rails.

Alex Jones: You’re not Hitler, you’re not a Nazi.

Kanye: Well, I see good things about Hitler, also…Every human being has value that they brought to the tabled, especially Hitler.

Alex Jones is trying to close the segment, but Kanye keeps interrupting him with the Netanyahu voice and waving the net.

Kanye: “They did good things too, we’ve got to stop dissing the Nazis all the time.”

On the Alex Jones show, Ye took out a net and a Yoo-hoo drink and did a mock interview with “net and Yoo-hoo.” Alex Jones then claimed the British government created Hitler and believes “there’s a Jewish mafia.”

Ye: “I thought [Benjamin Netanyahu] had a funny name.” pic.twitter.com/SajZvdB4hJ

Kanye West (in a full facemask) and Nick Fuentes are on Alex Jones right now. pic.twitter.com/mIDpABKthC

Alex Jones: The Nazis were thugs.
Kanye West: “But they did good things too. We gotta stop dissing the Nazis all the time.” pic.twitter.com/hCdZIYoGqr

America First: Ye is a singular genius who is going to save this nation.

Ye, on Alex Jones, speaking in a baby voice and playing with a net and a bottle of Yahoo (get it?) to mock Benjamin Netanyahu for criticizing Trump for dining with him. pic.twitter.com/foeOaxtYUi

Alex Jones, pointing in a circle: “The whole world’s crazy. All of us are nuts. This is Twilight zone 2.0.”

Ye: “Don’t you point at me when you say that.” pic.twitter.com/q9BP9iIX9B

On the Alex Jones show and alongside Nick Fuentes, Ye defended Herschel Walker.

Ye: “He may have had abortions, but he doesn’t believe in abortions.” pic.twitter.com/0uCRMwXOPq