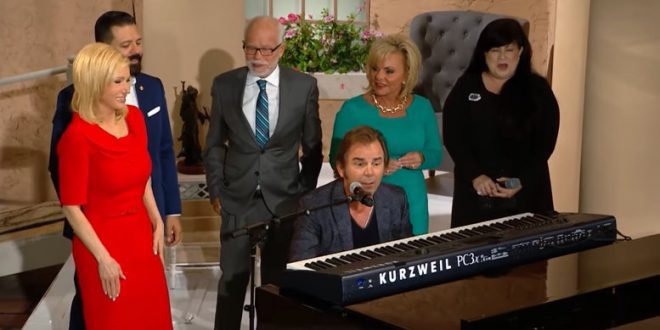 The members of long-running rock band Journey have long had fractious relations, but an inter-band cease-and-desist order is a new peak.

Keyboardist Jonathan Cain [photo above], who performed “Don’t Stop Believin’” for Donald Trump at Mar-a-Lago last month with a backing “chorus” including Marjorie Taylor Greene, Kimberly Guilfoyle and Kari Lake, was served with a cease-and-desist order from an attorney for bandmate Neal Schon for that performance.

Cain, 71, has long been a member of the former president’s inner circle. His wife of eight years, Paula White, is a televangelist and Donald Trump’s spiritual advisor.

Cain last appeared on JMG in 2017 when he told scamvangelist Jim Bakker that “Don’t Stop Believin'” was actually about Jesus.

Journey keyboardist Jonathan Cain has been served a Cease & Desist by guitarist Neal Schon on behalf of the band for playing their music at Trump events, calling it a “harmful use of Journey’s brand.”https://t.co/wg9y1DIONz