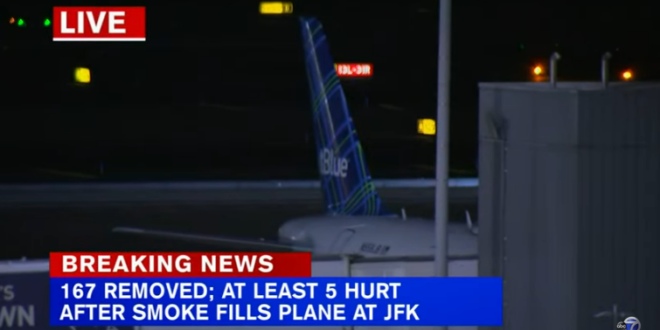 Emergency responders evacuated a JetBlue flight at JFK International Airport in New York City as a result of a small fire in a passenger’s laptop on Saturday evening, officials said.

Officials from the FAA, JetBlue and the Port Authority of New York and New Jersey said the aircraft was taxing to a gate at Terminal 5 when a lithium battery in a passenger’s laptop caught fire.

First responders and the crew evacuated 67 people from the Airbus A320 jet using an emergency slide system. Another 60 passengers exited the plane normally, the Port Authority said.

The flight crew called the fire in around 9 p.m., but extinguished the flames themselves. A passenger seated in the front row of the plane said the captain “came flying out of the cabin” when the fire was discovered.

“He grabbed a fire extinguisher, and was doing like an O. J. Simpson over the seats and passengers. The guy was amazing, and put the fire out. It was a complete zoo.”

Seven people were treated with minor injuries, but none were transported to area hospitals.

A “smoking laptop” which was reported by the crew of a JetBlue flight after it had landed at New York’s John F. Kennedy International Airport on Saturday night prompted a massive evacuation of the plane, officials said. https://t.co/2rmkHmsGgX